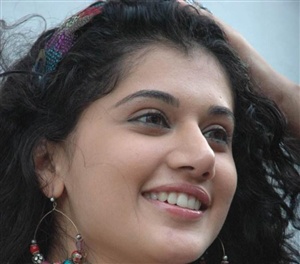 Tapsee turned out to be one of the hottest heroines in Tollywood after her debut film Jhummandi Nadam. Though the actress confessed that she rejected an offer in Bollywood opposite Abhishek Bachaan, the latest reports claim she signed on a dotted line for a Bollywood film.

Now Tapsee joins the bandwagon of Asin, Shriya, Trisha, Ileana and Kajal who made their baby steps in Bollywood via South film industry. This Punjabi Gudiya, after making successful debuts in Telugu and Tamil is now making her Bollywood debut under the banner Viacom18’s production with David Dhawan. The film is the remake of a classic comedy film Chasme Badoor and the rest of the details are awaited. The actress is super excited about the offer. Now it’s our turn to wait and see whether she migrates like Asin or returns back like Trisha.