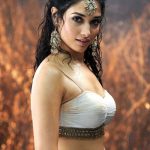 Heroine Tamanna Bhatia would be seen sporting a Bikini in her upcoming Telugu movie Raccha staring Ram Charan Tej. Raccha movie is getting into better shape with director Sampath Nandi already working on a contemporary subject and now the movie gets spicier with Tamanna seen in bikini.

Rachcha movie shooting would commence from June 1 and with all the masala and commercial elements ingrained into the script, the movie is expected to once again show case Ram Charan Tej as a commercial hero. What’s more, Ram Charan would coming with 8 pack body and if you add Tamanna’s oomph factor to it, perhaps its entertainment guaranteed.

From Tamanna’s perspective, she has to do 3 movies under Geetha Arts and she has already done 2 movies – 100% Love and Badrinath. And Geetha Arts has shifted this Raccha movie contract to Super Good Films and as such she need to follow the terms of Raccha producers NV Prasad and Paras Jain. Devi Sri Prasad is scoring the music.