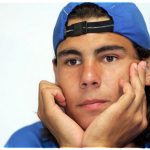 The fashion house announced on Friday that the 24 year-old will be the global testimonial for Emporio Armani Underwear and Armani Jeans for the spring/summer 2011 collections.

The first campaign featuring Nadal will launch in February.

Both Ronaldo and Beckham have previously stripped down to their underwear for Emporio Armani, with Beckham even posing for billboards with his wife Victoria, of Spice Girls fame.

Nadal won this year’s French, Wimbledon and U.S. Open titles to knock Roger Federer off the top of the rankings.