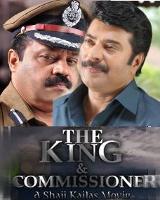 Director Shaji Kailas says that his new film ‘The King and the Commissioner’ would be dynamite material.

Shaji says that it was script writer Ranji Panicker’s assurance that led to the idea of this film. “We couldn’t work together for fifteen years since Ranji was busy,” says Shaji.

Ranji talks of the camaraderie these two characters share as ‘ a friendship that tears each other apart on sight’! The dialogues of the film are expected to be explosive and the film itself is expected to rock the box office.