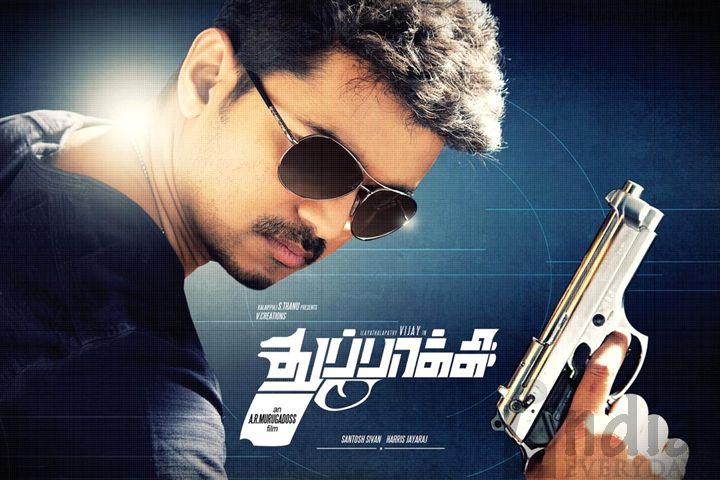 Jagadish (Vijay) is a top defense agent who arrives in Mumbai on a vacation. His parents wants him to get married to Nisha (Kajal). However, assuming Nisha to be a cute-homely girl and considering the risky nature of the job, he rejects her but later he finds out Nisha is actually a boxer with a go-get-it attitude. And later he falls for her. While this goes on, a bus blast takes place which leads Vijay to a terrorist organization and he finds out that 12 such blasts are planned across the city. What happens next forms the actual story.

How did they perform:

Even though, Vijay has no proper hit in Telugu, he is a big star in Tamil. This is the first time that Vijay has silenced his heroism and went in to the skin of the character. The director has taken special care to ensure that Vijay’s own star image does not override the character. Vijay-Kajal romance scenes are well received by the audience. The scenes in which Vijay’s senior Jeyaram comes in between Vijay-Kajal love, brings about non-stop laughter. Vijay had done some good dances too. Kajal looked gorgeous on screen and in fact, Kajal Agarwal has done an even better job than Vijay in the comedy scenes.

Vidyuth Jamal had done a good performance as baddie. He had improved more than his previous movie, Brothers. Rest of them had managed decent performances.

The story of Thupakki is not any new or innovative but it was brilliantly narrated. The real hero of the movie in fact is the racy screenplay by A.R.Murugadoss. The way the main story is packed together and the placement of the song and action sequences in simply superb. But the quality of songs in the process of dubbing had spoiled the party. Cinematographer, Santosh Sivan had weaved his magic once again. The hero and the visuals really looked rocking and stylish. Sreekar Prasad’s editing works are sleek as well as perfect. Harris Jayaraj’s interesting background score adds more power to the movie.

The dubbing is however a let down. Enough care is not taken to get the songs perfect and the comedy looked a bit out of touch to our nativity.

The movie was very well conceived by Murugudoss. The preinterval block, Fight between Vijay & Vidyut Jamal in ship, the Kidnap scene and the climax block are very intriguing. Considering the no competition from other biggies of Telugu, Vijay seem to have bagged a decent hit in Telugu. It is better the makers finish off their financial problems and get the movie a good release and publicity. Watch it!