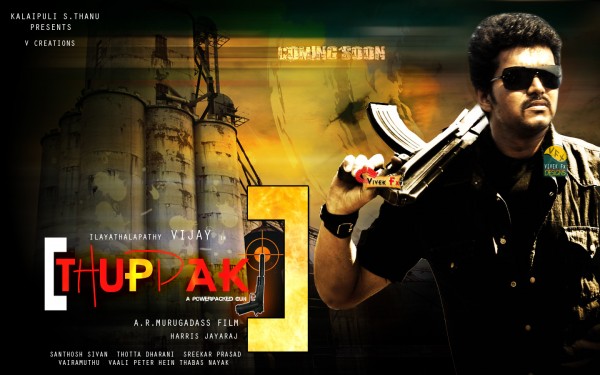 ‘Thuppakki’ new trailer has taken the Vijay fans by storm. The latest video footage, which was released yesterday, has got a record number of hits on video-sharing website YouTube.

Thuppakki firstlook trailer that was cut with running time 0.41sec and only one dialogue by Vijay ‘I’m waiting’ went viral through the audiences and hit 3.5 lakh views in 24 hours of its release. Kajal Agarwal is playing female lead for Vijay in this action entertainer Thuppakki directed by AR Murugadoss under his Gemini Film Circuit banner.

Music Scored by Harris Jayaraj, which are highly entertainer Vijay fans, as the star himself has crooned ‘Google google’ party number that is being made favorite by many. Kalaipuli S Dhanu producing Thuppakki has camera cranked by Santosh Sivan ASC, script by writer duo Suba and editing is being handled by A. Sreekar Prasad among the technical crew.