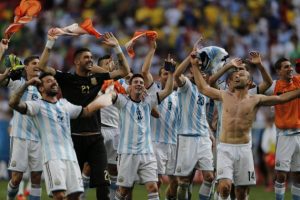 In the second semi-finals of the ongoing FIFA World Cup 2014, Argentina beat the Netherlands 4-2 in the penalty shootout to set up a summit clash with Germany. After 24 long years, Argentina have managed to reach the final of the football World Cup.

Look at the co-incidence; the last time when they reached the final in 1990, they lost the coveted trophy to Germany. And this time too they will be up against the Germans to lift their third World Cup trophy. So it would be a golden opportunity for the Albicelestes to take the revenge.

Apart from that, star striker Lionel Messi, who has often been often criticised for not winning a World Cup for his country like their former star footballer Diego Maradona, would too fancy his chances to prove his critics wrong by winning the prestigious title under his captaincy.

In the 2nd semi-finals, unlike the goal riot witnessed in the first one between Germany and Brazil, the match went to the penalty shootout after a goalless 90 plus 30 minutes of extra time. Even after having prolific goal scorers in both the teams in the form of Lionel Messi, Robin van Persie and Arjen Robben, teams failed to score a single goal. And in the penalty shootouts, Argentine found their new hero in goalkeeper Sergio Romero, who saved two spot kicks for his team in the shootouts to take his side through to their fifth World Cup final.

Though, the Dutch team did an excellent job to mark the four time World Player of the Year Messi throughout the game, it failed to find the back of the net as the match was dragged till the penalty shootout. And in the tense moments where Messi, Ezequiel Garay, Sergio Aguero and Maxi Rodriguez were spotless, the two Dutch players — Ron Vlaar and Wesley Sneijder – were blocked by the Argentine goalkeeper to end the Netherlands` World Cup campaign.

Now, if Argentina have an opportunity to take revenge from Germany their star striker Messi too have the best chance to become the hero of his nation by gifting Argentina their third World Cup title.