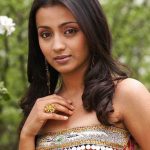 Trisha finds herself on the wrong side of the twenties. The actress, who would turn 29 in a few months’ time from now, is said to be running out of time to bag offers to play lead roles in Tamil and Telugu films. The reason is simple: most of the upcoming heroes in Telugu and Tamil appear to be younger than her and as such, produces and directors are reluctant to sign up Trisha to play the lead role in their films.

Trisha had a solitary release last year in Ajith’s Mankatha where she wasn’t the sole heroine. She had to share screen-space with three other heroines and an ‘item girl’ from Bollywood. At present, she has only one Tamil film on her hand which is Samaran opposite Vishal, a film which has a young and curvaceous Sunaina as the other heroine, underlining the fact that Trisha is not getting the solo-heroine projects any longer.

A few years back, Trisha had gone on record saying that she would be starring only opposite young heroes and that it’d be a strict ‘no-no’ to star opposite senior heroes except superstar Rajinikanth and Kamal Haasan. She, however, starred opposite Nagarjuna and Chiranjeevi in Telugu but hesitated a lot in starring opposite the likes of Sarath Kumar, Vijaykanth and Arjun in Tamil.

Though she starred with Kamal in Manmadhan Ambu, she wasn’t the heroine opposite him. She has now said that she was ready to star opposite any hero, irrespective of his age. Desperation and the need to sustain her in films for a long time might have forced her to make the statement, observers point out. Trisha’s decision to relax her ‘policy’ might see her soon pairing up opposite the likes of Sarath Kumar and Vijaykanth.

“If the script and my character in it are good, I won’t have any problems in starring opposite any hero; as such, I won’t bother as to whether the hero is young or a senior one,” says Trisha.