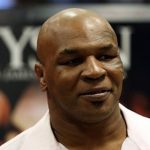 They will be enshrined June 12, 2011, at the Hall of Fame Museum in Canastota, New York.

Inductees were selected by members of the Boxing Writers Association and a panel of international boxing historians.