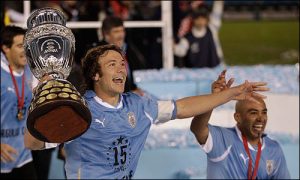 Suarez put Uruguay ahead in the eighth minute of the final at the Monumental when his low, left-footed shot from the right beat the diving Justo Villar and went in off the far post.
Forlan, the 2010 World Cup’s best player, made it 2-0 three minutes before halftime when he ran onto a ball from midfielder Egidio Arevalo Rios and blasted left-footed past Villar from the edge of the box.

In a last-minute counter-attack, Forlan made sure of the title with his second goal, steering the ball past Villar and in off the post.

Uruguay now have one more title than hosts Argentina, whom they upset on penalties in the quarter-finals, at the end of a fine 12 months following their fourth place at the 2010 World Cup.

Outgoing champions Brazil, also eliminated in the quarter-finals on penalties by Paraguay, have eight titles.