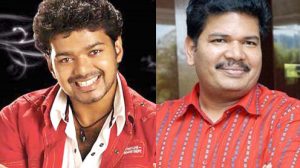 Putting all assumptions, premonitions and the ifs and buts over the Tamil remake of ‘3 Idiots’ the producers of the film Gemini Film Circuit has released a statement confirming their mega venture is titled ‘Nanban’, it will be directed by Shankar and star Vijay, Jeeva and Srikanth in Aamir Khan, Madhavan and Sharman Joshi roles respectively.

Scenes involving Jeeva, Srikanth, Sathyaraj, Sathyan and SJ Suryah are being shot in Ooty for the next ten days. Ilaya Thalapathi Vijay will join the team from February 25 for his portions.

Other important credits in the technical side are: Cinematography by Manoj Paramahamsa, Music by Harris Jayaraj, Lyrics by Na Muthukumar, Art by Muthuraj, Editing by Anthony, Dialogues by Shankar and Madan Karky.

So get ready to welcome the ‘3 Idiots’… sorry… 3 FRIENDS.