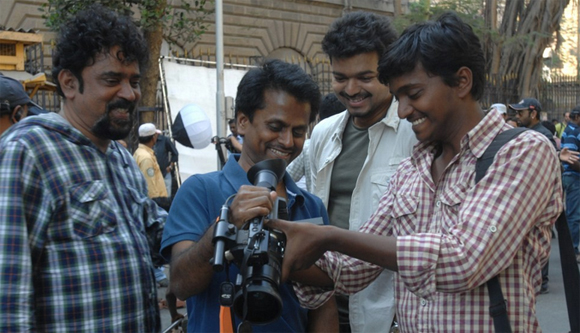 Director AR Murugadoss will go on floors with his next outing with Ilayathalapathy Vijay early next year. The duo had worked together in Thuppaki, which was set in Mumbai. And for this new venture, the director is said to be scouting for locations on Kolkata right now.

It is known that cinematographer George C Williams of Maryan fame is zeroed in by ARM for his untitled next and the cameraman was spoted in Kolkata, who is on location hunt for their film.

After the Successful partnership of Vijay and A.R. Murugadoss for the super hit film Thuppakki, which was taken in different locations of Mumbai, the same duo continues their partnership for their new project for the New Year 2014 at Kolkata.

With all probabilities, the second Tamil film from Thuppakki combo is expected to kick start after Pongal, post the duo are done with their present commitments.

Tamil movies like Aadhavan, Manju and Jay Jay were also taken at the Kolkata city. We can always expect, Murugadoss to choose exclusive locales for the upcoming movie.

Young Music Director Anirudh has been roped in for the Composition of Music for this upcoming new venture.

Samantha will pair opposite Vijay in this yet-to-be-titled film that will have music by Anirudh Ravichander. Meanwhile, Samantha is shooting for Lingusamy’s film with Suriya and ARM is busy with his Akshay Kumar starring Ramana remake in Hindi, while Vijay’s Jilla release is slated for 10th January.

The director and his team are on the city finalising the locations where the movie would be shot, say sources. The technical team includes music director Anirudh and cinematographer George C Williams and national award winning editor Sreekar Prasad. AR Murugadoss has a very interesting script for the Ilayathalapathy and this film is aimed for released for Diwali 2014, adds our source.