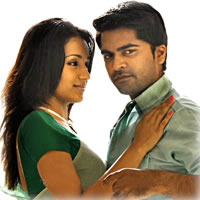 The breezy romantic entertainer which has Silambarasan and Trisha essaying lead roles as Karthik and Jessie, directed by Gautham Menon has made a long lasting impression not only in Tamil but Telugu and very shortly its going to do the same magic in Bollywood too.

Well have an interesting update n the store for VTV lovers.

It is known that the team of VTV is coming together yet again with the sequel for the former blockbuster. The sequel is tentatively titled as Vinnaithandi Varuvein which will be directed by Gautham Menon and Simbu will play Karthik again. Music for this sequel will scored by AR Rahman. So, the next big question is will Trisha play Jessie again.

There is a chance of Trisha playing Jessie as in a recent interview the actress confessed that she would love to play Jessie again if given an opportunity. The chances are bright for Trisha doing Jessie again as Gautham is a very close friend of the actress. Vinnaithandi Varuvein will be colourful and will be made more than just a breezy romantic entertainer. Though there is no official announcement of the sequel but this news has been passed by Simbu’s official fans page in a networking site to all Simbu fans.

The project is expected to start once STR and Gautham complete all their prior projects.

Well, lets wait for an official announcement from the filmmakers and hope for the best.