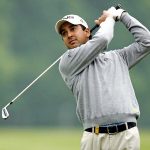 The 28-year-old former Asian Games gold medalist is managed by ISM who have now partnered with WSG to oversee his affairs in Asia.

“I feel it is an appropriate time to work on the huge opportunities that exist in Asia and I think World Sport Group, with their vast experience in the region, are the ideal company to be associated with,” said Kapur.

Kapur enjoyed a distinguished amateur career winning the Malaysian and Indian Amateur Championships in 2000 and the gold medal in the individual section of the 2002 Asian Games.

He turned professional in 2004 and quickly made the transition by winning the Volvo Masters of Asia in Thailand the following year.

Since then he has plied his trade on both the Asian and European Tours.

Earlier this year he came close to winning his first title on the European Tour, losing out in a sudden-death play-off in the South African Open.

“Shiv Kapur is one of the most exciting Asian golfers in the game and has an extremely bright future. As his career goes from strength to strength, World Sport Group will work in tandem with ISM to ensure he has full support in Asia,” said Patrick Feizal Joyce, Vice President, Golf, World Sport Group.