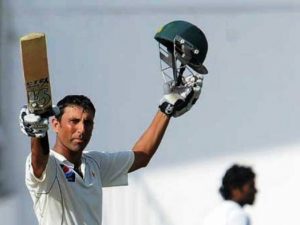 Younis Khan’s epic, unbeaten 171 led Pakistan to their highest successful chase, the second highest in Asia for any side, and the sixth highest in all Test cricket. It also gave them their first series win in Sri Lanka since 2006, and catapulted them to third in the ICC Test rankings.

Skipper Misbah-ul Haq made 59 not out, smashing the winning six off Jehan Mubarak to end his nation’s long winless streak in Sri Lanka, where they lost in 2009, 2012 and 2014.

It was the first time a visiting team had scored more than 300 runs in the fourth innings to win a Test on Sri Lankan soil.

Pakistan’s previous highest successful chase had been the 315-9 they scored against Australia to win the Karachi Test in 1994.

Younis, who made his 100th Test appearance in the second match, ended the game just 19 runs away from surpassing Javed Miandad’s tally of 8,832 runs to become Pakistan’s leading scorer in Tests.

Pakistan added 25 runs to their overnight score when they lost the wicket of Shan Masood, who was stumped by Dinesh Chandimal off Tharindu Kaushal for 125.

The Kuwait-born left-hander’s maiden Test century came during a third-wicket stand of 242 with Younis after Pakistan had been reduced to 13-2 on Monday afternoon.

Sri Lanka claimed the second new ball as soon as it was due in the 80th over but the seamers were unable to make an impression on the easy-paced wicket.

The 37-year-old Younis, who came to bat after the fall of the second wicket, stayed solid at one end during a seven-hour vigil in which he hit 18 boundaries.

Younis’d five hundreds in the fourth innings — in a career tally of 30 — are the most by any batsman.

Misbah provided able support during a 127-run stand with Younis, mixing caution with aggression which fetched him eight fours and a six.

Sri Lanka missed the experience of left-arm spinner Rangana Herath, who was not selected, as young off-spinner Kaushal was hammered for 153 runs in his 31 overs.

Pakistan won the first Test in Galle by 10 wickets and Sri Lanka took the second in Colombo by seven wickets.

The two teams will now play a limited-overs series of five one-day internationals, followed by two Twenty20 games, from Saturday.