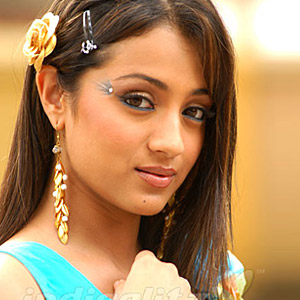 Trisha Krishnan was born on 4th may 1983. This brown eyed beauty who is known for her strong will power was born to the couple MR. Krishnan Krishnamurthy and to Mrs . Uma Krishnan krishna murthy . Trisha was born in Palakkad which is in Kerala. She belongs to a promienent Iyer family in pallakad .Trisha has a sweet looking smile which stole million hearts of her fans in Tamilnadu and Andhra Pradesh and also Abroad. Trisha krishnan is known for her versatile acting and also for her impeccable dancing talent as she was a ballat dancer in her early teens .

Trisha krishnan sun sign happens to be Taurus . She is a girl with light brown eyes . This Tamil beauty is about 5 ft 7 inches tall with a perfect shape physically . Trisha Krishnan pet name happens to be HONEY and also is known as Trisha Krishnan as she was a daddys daughter . Mainly she is called by her parents and by her close friends with this name ..

Though this tamil Iyer was born in kerala ,she pursued her school studies in Chennai . She studied in Church Park and was a brilliant student in her studies . Trisha passed out her school studies with 92 % of marks over all . Trisha Krishnan was also an active participant in her school cultural activities . she then joined ethiraj college for her higher education . Actress Trisha was determined to complete her BBA degree { BACHELOR OF BUSINESS ARTS }.as she was planning for a masters degree in business management .{MBA } in her near future . Actress Trisha was backed by laurels as she studied in the same school where the chief minister of Chennai MS . JAYALALITHA completed her school education .

Trisha Krishnan is a lady who grewup with strong determination and immense will power .But she happens to be a very sensitive lady as she is very hard thinker on small petty issues and is also very much frightened to loose her loved ones if she hurts them . . Trisha is fond of gud perfumes . she also loves people with good sense of humour and at the same time hates the people who are back biting , in- compassionate and also lack basic manners .

Soon after her pageant success, Krishnan began her career acting in an uncredited role as Simran’s friend in Jodi before moving onto appear in advertisements and in music videos, with Falguni Pathak’s Meri Chunar Ud Ud Jaye being the most prominent. The first project she accepted was the Priyadarshan-directed Lesa Lesa, with the promotional posters for the film, also creating an offer to star in the A. R. Rahman musical, Enakku 20 Unakku 18 (2003). However both the projects’ releases were severely delayed, and her first release was Ameer’s Mounam Pesiyadhe opposite Surya Sivakumar. The film became a moderate success at the box office and did manage to gain credentials for Trisha, with critics claiming that she was “undoubtedly a refreshing new find, with sparkling eyes and appealing demeanour”, also going onto praise the dubbing artiste, Savitha Reddy, who has since regularly dubbed for Trisha. Manasellam, her second project, saw her play a cancer patient; but the film also went unnoticed despite positive reviews for the film and the actress.

However her next release in 2003, the Hari-directed police film, Saamy with Vikram, became a blockbuster at the box office, landing her new offers. In 2004, she debuted in the Telugu cinema industry with Varsham, which went on to become the highest-grosser of the year and turned her into an overnight sensation. Later that year, she was part of another commercially successful Tamil venture, Ghilli. In 2005, she starred alongside Siddharth Narayan in the Telugu flick Nuvvostanante Nenoddantana as the village girl Siri. The film is about a rich boy, who tries to marry a girl – however her brother opposes. Directed by Prabhu Deva, it was successful at the box office, and Krishnan won two awards for the film which include the Filmfare Award and Nandi Award.

She next appeared in Mani Ratnam’s political drama Aayutha Ezhuthu, starring as part of an ensemble cast that included Siddharth Narayan, Madhavan and Surya. Her subsequent releases, N. Lingusamy’s Jiand the Vijay-starrer Aathi did not do well at the box office, while Aaru was a success and was received well by critics.[12] Her 2006 Telugu film, Pournami, directed by Prabhu Deva, was a flop. However, another 2006 film, Something Something … Unnakum Ennakum, where Krishnan acted opposite Jayam Ravi, did well at the box office. The film was a remake of the Telugu film, Nuvvostanante Nenoddantana, where she essayed the same role.

She starred in the Telugu film Stalin with Chiranjeevi, following which her Telugu film Sainikudu with Mahesh Babu was released. Her next release was Aadavari Matalaku Ardhalu Verule where she was cast opposite Venkatesh. The film, Selvaraghavan’s first Telugu venture, was a family entertainer and received good response especially from the family audience. Krishnan’s performance was critically acclaimed and won her accolades, eventually resulting in her third Filmfare win.

In Kireedam with Ajith Kumar, Krishnan tried comedy and received rave reviews. Kireedam opened with high expectations and received good reviews from media and audience and was declared a success. Her 2008 films, Bheema and Kuruvi failed to succeed at the box-office, while Krishna with Ravi Teja, opened to rave reviews, and became a blockbuster. Her other release Bujjigadu starring Prabhas, directed by Puri Jagannadh was released during Summer and made a decent run. However Radhamohan’s Abhiyum Naanum became a super hit and Krishnan was praised for her performance. King starring Akkineni Nagarjuna directed by Sreenu Vaitla was a December release and it became a blockbuster.

In 2009 her movie Sarvam with Arya did not do well and became just an average grosser. Her latest Tamil release Vinnaithaandi Varuvaayaa, directed by Gautham Menon opposite Silambarasan, released to positive reviews and also became a commercial blockbuster. Her 2010 Telugu release Namo Venkatesa, opposite Venkatesh, is a super hit. In the same year Krishnan starred in Manmadhan Ambu with Kamal Haasan and R. Madhavan and it became an above average grosser. Trisha made her debut in Hindi film industry with the Priyadarshan film Khatta Meetha, starring opposite Akshay Kumar. Her latest release Theenmaar with Pawan Kalyan, which released on April 2011, has become a huge blockbuster. Her next release is Ajith Kumar’s magnum-opus Mankatha which is scheduled for June 2011 release. She also has signed up to do Bodyguard in Telugu opposite superstar Daggubati Venkatesh. The film is a remake of the Malayalam Bodyguard.