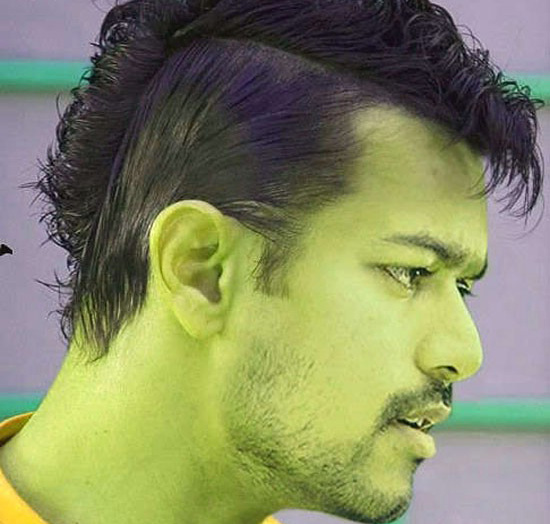 Ilaya Thalapathi Vijay is famous for rarely donning new looks or trying out different styles, it is said that the actor considered trying out a new avatar for his look in Shankar’s multi-starrer, ‘Nanban’.

However, he was unable to proceed with this new hairstyle due to his commitment to Jayam Raja’s ‘Velayudham’ that is all geared up for an August release. This film is a commercial action-masala entertainer and sees Vijay opposite Hansika Motwani, with Genelia playing a television reporter. It showcases how a commoner is forced to don the role of a superhero to save humanity and his own family.

This look is said to have been a cool and funky one and the trial seemed to have impressed the whole crew, but Ilaya Thalapathi couldn’t continue with it. However, we must note that Jiiva sports a whole-new-look for ‘Nanban’, with long kurta pajamas, hands filled with finger rings to each please a God and what not.

Who can ever forget the kind of changes Shankar brings in the look of each star for his films? What if Vijay couldn’t sport a makeover through his hair style, through his wardrobe makeover, right from a backpack to some handsome young t-shirts, we can already see a young avatar of Ilaya Thalapathi from the pictures of ‘Nanban’, true to his role as a college student in this film.

2 thoughts on “A makeover for Vijay?”