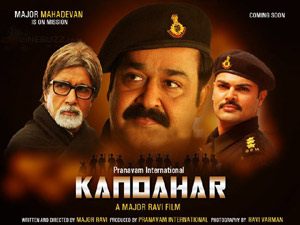 Major Ravi held a special show of his Mohanlal’s Kandahar for Amitabh Bachchan at the luxory 5 star Leela Kempinski in Mumbai on Wednesday (December 15) evening.

Big B who plays an important role in the film was said to have been very impressed with the film.

The film is expected to take an earth shattering opening.