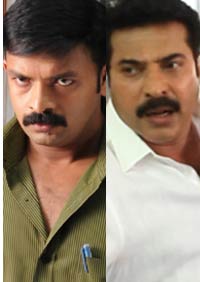 The Train is directed by Jayaraj, and has Mammootty, Jayasurya and Sheena Chohan. The film is based on the Mumbai train bombings of 11 July 2006.

Train is a take on the lives of Malayalee families affected by the bomb blasts. Mammootty plays a police officer investigating the murder of a young man who had come to Mumbai to sing a track under composer AR Rahman.

Janapriyan is a comedy film with a message directed by debutant Boban Samuel and has Jayasurya and Bhama in the lead. Manoj K Jayan plays Jayasurya’s elder brother.

It is the last Friday of Kerala’s summer season 2011. Monsoon is predicted from June 1, so producers will not release new films after May 20