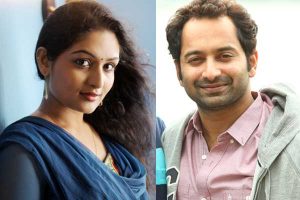 In his upcoming movie ‘Cartoon’, Fahad Fazil will romance Prayaga Martin. ‘Cartoon’ is scripted and directed by Shahid Arafath.

‘Cartoon’ is a love story which portrays the ego clashes between two persons from entirely different backgrounds and the unexpected twist.

Joju George is also seen in a major role in this movie. The movie is produced by Haneef Muhammed in the banner of Red Rose Creations.

Pappu wields camera for ‘Cartoon’. The film is expected to start its shoot by mid-March.

Prayaga made her film debut with the Tamil supernatural movie ‘Pisaasu’ written and directed by Mysskin. The movie was a hit.