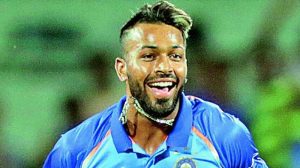 Hardik Pandya has been withdrawn from India’s squad for the three-Test series against Sri Lanka to manage the all-rounder’s heavy workload, the Board of Control for Cricket in India said on Friday.

The 24-year-old seamer and hard-hitting batsman has been a regular member of the Indian side in all three formats of the game and has been playing non-stop since the ICC Champions Trophy in England in June.

Pandya was named in India’s squad for the first two Tests against Sri Lanka and no replacement has been named.