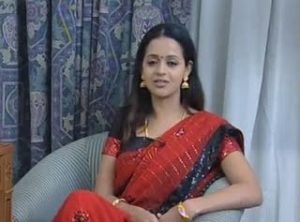 Here is one heroine, who endeared herself to the audiences with her graceful performance + the sympathy factor. When her character was raped and done to death in Gopichand’s Ontari, “there prevailed large-scale sympathy for the character. It moved one and all.” Bhavana emerged direct from the silver line of Tamil and Mallu film industries. Hailing from Trissur in Kerala, this 22-year-old beauty believes that “the audience don’t even care two hoots for anybody if he or she, technician or artiste, doesn’t hold the talent. After all, it’s business. If people think of getting through always by mere bluffing, they have to pay dearly for it.” The actress sounds much matured in her approach to the tinsel world, which also holds out something nasty for her. “But, I can’t divulge certain things which loathe in the film industry, but by and large, I love it,” Bhavana says. Currently, she is paired up with Nitin for the film titled Hero.

Tell us your background before coming to films?
It’s simple. I don’t have any filmy background. Just I have been passionate about films since my childhood. After doing my 10th class, I was even more possessed with a burning desire to become an actress. I got the offer in Malayalam film – Chintamani Kolai Case. Shaji Kailas directed it. Suresh Gopi was my costar. It was a stupendous hit there. I think it also came in Telugu. My education was stopped with just intermediate. Later, I did some good films at my home industry, before getting into Kollywood. Now, I am in Telugu setting my foot here with Ontari. I am thankful to all the Telugu people, who really liked me. Wherever I move in Hyderabad, people, mostly the youth, recognize me and extend very friendly gesture, saying I simply rocked with moving performance in Ontari.

Who is your godfather?
God alone is my godfather. I don’t need to tell you much. It is really tough to get into the glamour world. Even if we enter, the longevity is doubtful. Trends are changing. Different scripts are coming up every day. I believe in God and He will continuously help people who ever keep trying to improve their knowledge in their respective fields. I respect talent. This attitude always protects me in the profession and personal life as well.

Is Bhavana your real name or Screen name?
My real name is Karthika. Bhavana is my screen name.

Ontari brought you rave reviews. When are you going to act with big heroes?
I know that when a film clicks, it also brings luck to the heroine. She will find herself through stardom. I don’t believe in things like acting with big heroes when we get a break. I always consider myself as an actress, first. Why should I discriminate between big heroes and small heroes? Is there anything like this demarcation for an artiste? I don’t know. I just believe that people will like an actor or actress just by their performance. Not because of costarring with big heroes or heroines. Now that I entered into the film world, I feel it like a fraternity.

How do you respond to gossips?
I don’t think there are any gossips about me. I don’t really take this thing seriously. Just like that they come and go. They are like seasonal diseases. When we maintain professional attitude, it is the best way to keep rumors at bay. Making friendship just to follow a fad is something that contributes to gossiping. Other than romance and marriage or separation, you don’t find anything else.

What are your professional priorities?
See, now I have an identity as an actress. Every professional will have its priorities. I am almost 20-films old. I have a perception of my own. I give great importance to story, followed by the track record of its producer and the talent of the director and my costar. All these things need not be compulsory, but a glance at these things makes an actress professional. This approach will definitely help a heroine in the longer run.

So, you decided to work with only talented directors and costars?
I have not decided. But, it’s my priority. Sometimes things come our way, and sometimes; we go their way. To that matter, everybody is a mine of talent… in something or the other. Basically, I give utmost importance to each and every individual. This keeps me cool. Coming to film industry, everybody before coming to films thinks that he is talented. If he doesn’t get opportunities, he thinks there is no place for talent in the industry. An artiste or director or any technician will shine only when he puts himself in the ring of constant training and sharpening of his skills.

What do you do keep yourself fit?
I do yoga. I take good food. I never diet. I keep myself always happy. I don’t think we have any right to disturb our minds. And also, it our foremost duty to maintain physical agility. Not only artistes, I think health should be taken care of by all people.

You did all over the South. When are you going to Bollywood?
Of course, every heroine from the South will eye for Bollywood. When we dream of Bollywood, we should also know that we are just dreaming. We should do something worthwhile to realize the dreams. Watching my film – Chintamani Kolai Case (Malayalam), a filmmaker from Mumbai approached me to do the Hindi version myself. But, that time I was young and couldn’t take decisions of my own. Also, I was busy with a couple of Tamil films. I didn’t accept the Hindi project. I don’t know what happened later. I am 22 now. If such a thing repeats, definitely, I will take good decisions.

You are frank enough to say that you are 22. Do you think heroine generally reveal their age?
Yes. I am 22. Why should I hide my age? What would I be getting out of it? There are three things. Either you should reveal your original age, or make false statement, or remain silent. Which one you think is better? It will be there in my passport, driving license and everywhere. I can’t also escape the Net information. I too am aware of it. Generally, girls feel embarrassed to reveal their age. Always, girls try to reduce the original figure, but not all girls.

What’s your opinion about love and marriage?
They are vey important to live a good life. See, everybody loves. Marriage is part of our lives. We can’t simply evade it. As of me I never say I never loved. But, definitely I will marry the right guy.

You are a +2 dropout. Don’t you think you missed your college life?
Yes. At first, I felt very bad. Later, I forget about it. I am now satisfied that pursuing film career is also like education. You get recognized. You do entertain a large number of people. I hope to continue my studies. This I will definitely do after marriage.

Which industry you consider the best in the South?
Surely it’s Tollywood, which is next only to Bollywood. You have great many artistes and technicians. Everyday the industry is busy. There is a lot of scope for advancement. Remuneration-wise also, Telugu film industry is lucrative. Why? You can find all our girls coming from Kerala get into Tollywood via Kollywood. It amply testifies the strength of Telugu field.

You said God is your godfather. Who is your favorite God?
It’s Lord Guruvayurappa in our Kerala. He is Lord Krishna. His enchanting power mesmerizes me. Consciousness about him makes me cool at all times.

What’s your taste for music?
I love music a lot. I listen to all sorts of music. Classical, Western, Hindustani and film stuff. I have a bagful of CDs and Cassettes. I also hum my favorite songs. Recently, I liked the song… Enthandaga Unnave.

What are your hobbies?
Music, reading books.

Your future projects?
I am engaged to some film in Tamil and Malayalam. One film I doing as part of helping the poor and downtrodden artistes.