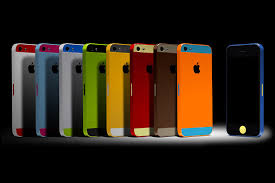 Apple launched the iPhone 5S & the iPhone 5C, most of features already leaked out pretty accurately. As actual features and specification are noted bellow.

The display on the iPhone 5S remains the same at 4.0 inches with a pixel density of 326 ppi. As expected, the design is also the same as the iPhone 5.

The iPhone 5S comes with the new A7 chip which Apple claims to be the world’s first 64 bit desktop-class architecture in a smartphone. Apparently Huawei Ascend D Quad launched in Feb 2012 last year also boasted of a 64 bit chipset.

M7 motion coprocessor gathers data from the accelerometer, gyroscope and compass to offload work from the A7 for improved power efficiency. Apple has allowed developers’ access to the new CoreMotion APIs that take advantage of M7, thus allowing them to create better fitness and activity apps.

Built into the home button, Touch ID uses a laser cut sapphire crystal, together with the capacitive touch sensor, to take a high-resolution image at about 550ppi of your fingerprint. Touch ID will allow you to authenticate Appstore purchases and app updates besides providing security lock to the iPhone 5S.

The iPhone 5S boasts of a new 8MP iSight camera, which features a larger f/2.2 aperture and a new, larger sensor with 1.5μ pixels for better sensitivity and low-light performance. The camera has capability to shoot 10 frames-per-second in burst mode, and 120 frames-per-second slow motion video at 720p.

The dual LED Flash, called the True Tone Flash by Apple adjusts colour and intensity for over 1,000 combinations to give better images under dark light conditions.

The iPhone 5S comes with iOS 7, Apple’s latest redesigned UI along with the option to download the iWorks apps Suite for free which includes iPhoto, iMovie, Pages, Numbers and Keynote apps that are otherwise paid for apps.

The iPhone 5S will be available starting Sep 20th in the US, while it is expected to be made available in India sometime during mid-November.