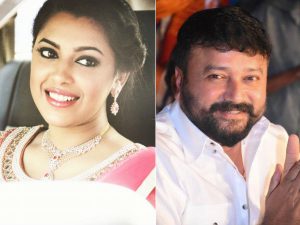 Jayaram and Jewel Mary are paired in the forthcoming movie titled ‘Aadu Puliaattam’. This is Jewel Mary’s third film. She has shared screen space with Mammootty in her first two movies.

‘Aadu Puliaattam’ is directed by Kannan Thamarakkulam. Om Puri and Remya Krishnan also do prominent roles in this movie which is based on a myth that is believed to have happened around 600 years back.

‘Aadu Puliaattam’ is produced by Haseeb Haneef and Noushad Alathur under the banner of Grande Film Corporation.