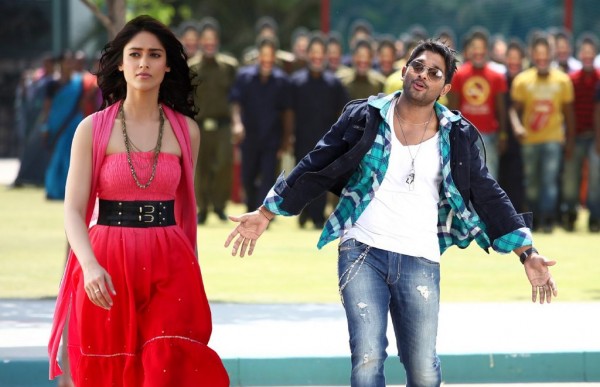 Ravi (Allu Arjun) is a youngster from a middle class family in Vizag who dreams of growing rich. He participates in a cricket betting one unfortunate day to earn quick money.

On the same day, a gang led by Gattu (Sonu Sood) robs a bank and siphons off Rs 1500 Crores from the bank. Ravi with the help of police stops the gang from taking away the container. The gang hides the container in a dump yard and Gattu`s brother (Shafi) gets killed in the shootout.

Fearing that Gattu would avenge Ravi, a senior police officer asks him to hide at his friend`s (Rajendra Prasad) place in Hyderabad. In Hyderabad, he falls for the charms of Madhu (Ileana). Rest of the drama is the clash between Gattu and Ravi and the case of the missing container.

Don`t go for easy money is what writer director Trivikram has tried to convey through this action entertainer titled Julayi. This is the first film where Allu Arjun and Trivikram are working together.

Known for his comedy tracks in films and great lines; Trivikram has come up with some of the best lines (thought provoking dialogues) and some decent entertainment in this film too. What he misses this time is the riveting narration in the second half.

The characterization of the protagonist completely defies logic. Hero predicts every move that the villain would take, he also keeps telling others what could have happened and how a particular incident did take place. Director has not provided any info about the hero`s clairvoyance!

`Mr Nothing` even controls the police officers as if he were their chief. From guns, bullets, cars to helicopters everything is at his disposal.

First half of the movie is interesting; it goes in a jiffy and is funny. Second half is a big letdown. Trivikram never lets you down in dialogue department and he is in best form here.

The performance in the film can be rated as one of the best in Allu Arjun`s career. He is too good in delivering emotional dialogues. Like always, he looks stylish and dances well.

Ileana looks too thin in the film but her romantic track with Allu Arjun in the first half of the movie is first-rate. Sonu Sood excels in the role of main villain. Rajendra Prasad as a timid police officer provides some good fun along with Brahmanandam.

Kota Srinivas Rao as a greedy politician and Tanikella Bharani in a father role are okay. Among other cast members, Rao Ramesh makes an impression.

Despite erratic placement of songs, Devi Sri Prasad`s music and picturisation of the songs are the highlights of the film. Cinematography (by Chota K Naidu and Sham K Naidu) and editing by Pravin are decent. Action sequences by Peter Hien especially the chase sequence before the interval is over the top.

Trivikram is one of the finest directors in Tollywood but this time the dialogue writer in him dominates. He has shown his creativity in establishing the story with good finesse but after that there is hardly anything that shows his mark as director.

Julayi is an action entertainer that has a good first half laced with some of the finest dialogues. Comedy and dialogues are major assets to the movie. Second half of the movie is a letdown. If you are looking for time pass, then the film provides it but on the quality front, it is just average movie.