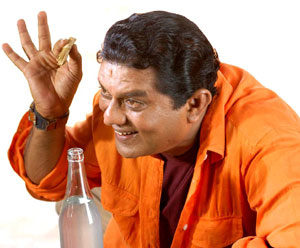 The front line comedy artist of Mollywood Jagathy Sreekumar and shortest actor Guiness Pakru will join to don the lead characters in the new movie titled as ‘Kunjettan’. Directed by Sasi N Nair and Raju Thottam, the movie will be scripted by Jiji K Aymanam.Suraj, Saikumar, Manianpilai raju, Sudheesh, Anoop Chnadran, Saju Kodiyan, Vettukili Prakash and Jaffer idukki are part of this comic entertainer which will be produced by Poonkaavanam films.

Earlier, Guiness pakru had donned the lead in movies like ‘My Big father ‘ and ‘Swantham Bharya zindabad’ which were reasonably safe earners in the Box office.