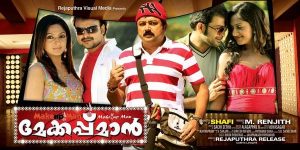 Renjith has now confirmed that it will release on February 11, for the big Valentine weekend.

The director of the film Shafi is riding wave as his Marykundu Oru Kunjadu featuring Dileep and Bhavana in the lead is a blockbuster and will celebrate its 50th day on the release day of Makeup Man!

The film is said to be an “emotional entertainer on the life of Balu, a small time makeup man in films”.

It has comedy elements and is written by Sachi-Sethu with some melodious music by Vidyasagar.

Everybody in the industry is hoping that director Shafi’s lucky streak at the box-office will help the film to take an opening.