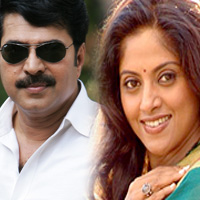 Mammootty after August 15 debacle is now backing on Doubles.

It will be his big Vishu release on April 15. The film directed by debutant Sohan Seenulal is a family drama based on the life of Giri and his twin sister Gowri.

One time favourite heroine of Malayalee audiences of the 80’s Nadia Moidu is returning to Malayalam industry after 23 years with Doubles, where she plays Mammootty’s twin sister.

Even though Nadia had acted in many Tamil films after her marriage she has been waiting for a good project in Malayalam. Nadia is appearing in the sister’s role as Gowri.

Mammootty and Nadia had paired up in many hits including Shyama and Poovinu Puthiya Poonthennal in the past. Tapasi will play Mammootty’s love interest.

The star cast includes Salim Kumar, Suraj Venjarammoodu etc. Doubles is produced by Reels on Wheels and is scripted by Sachi Sethu duo.

Mammootty fans are expecting that movie will be a special  ‘Vishu Kaineetam’ from the megastar.