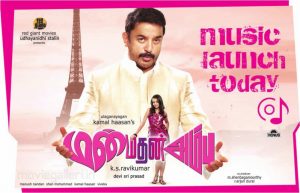 As per the last count 600 to 650 screens will be showing the film across the globe, for the big Christmas weekend.

The MA team is trying to keep the hype around the film under control, so that unnecessary expectations are not created.

In Chennai city the film is opening in 19 screens, the highest ever for a Kamal film. Advance booking in leading multiplexes have been sold out for the weekend.

The first screening of the film took place on Wednesday (December 22) night. Kamal arranged a screening for best friend Rajinikanth and other close friends like Prabhu and Parthipan at his Rajkamal state-of-art preview theatre at home.

Meanwhile Madhavan and Trisha who are active on Twiitter has tweeted about their memories and the lovely time they had shooting for Manmadhan Ambu.