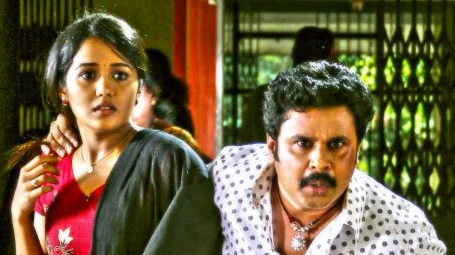 Expectations were sky high for this Dileep starrer as it was touted as Ananthapadmanabhan’s tenth head. Nadodimannan’s gritty script does not suit the romcom extravaganza that characterises Dileep’s movies. Nadcodimannan is a good v/s evil tale that chronicles the life of a simpler yet brave villager who achieves greatness. This is one movie where politics, romance, rags to riches, action and the usual masala has been interwoven. The story of Padmanabhan (Dileep) who is a man power supplier for theatres, strikes etc finds himself embroiled in trouble when he reacts to injustice at the hospital where he is admitted. He unwittingly locks horns with the bigwig business tycoon Prakash Pushpam (Sayaji Shinde). The hero in the simple villager is brought to the fore as he questions eviction orders, organises strikes and prepares the way for a change. Against this backdrop, he is forced by the people to contest the elections against the reigning mayor, Purushothaman (Vijayaraghavan). In the meanwhile, three beautiful ladies adorn the screen – Meera (Ananya) who faces trouble at the hands of the business tycoon, Aathira (Archana Kavi), a doctor and Rima (Mythili), a journalist. The rest of Nadodimannan traverses the path of politics and romance as Padmanabhan really becomes the Nadodi Manan. Technically, the movie could have been better. Editing and cinematography let the movie down in places. Moreover, the placement of the songs and execution of the script are not anywhere near the expectations whipped up by the movie. Dileep as usual does his stuff and trades his gimmicks to entertain and the leading ladies lend amble support in an insipid narration. Director Viji Thambi misses out on many a pitch line and Dileep alone carries the entire weight of the movie with no support whatsoever.