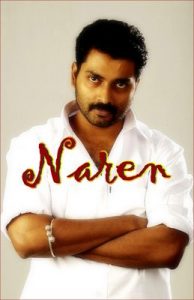 ‘Earlier, when i approached a film, i believed that the screenplay mattered to 90 percent of its outcome, and 10 percent for its director and banner. That was why i haven’t approved much of he projects that came my way. But now, i think that screenplay and direction are equally important as a 50:50  in film making’ says actor Naren, who was not much seen in Mollywood these days. The actor who is currently donning the lead role in the movie ‘Veeraputhran’ based on the life of Abdul Rahiman Sahib, also makes clear that he will be seen in more movie projects in the coming days. Naren, who has done much homework to be in the role of the veteran freedom fighter, is cast  on a different look in the movie which is currently progressing with its shoot at Pollachy.