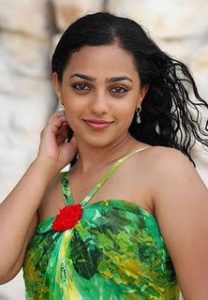 Nithya Menon, ever since her impressive debut playing the heroine to Mohanlal in ‘Aakashagopuram,’ always had her share of young fans. As of now there is no looking back for the actress who had delivered fine consistent performances in movies like Kerala Cafe, Angel John to the latest hit ‘Apoorvaraagam’. The actress is presently busy shooting for his Sibi Malayil movie ‘Violin’.

But the latest news is that Nithya’s first release in Telugu Ala Modalaindi, directed by Nandini Reddy is doing well there. The actress rates her debut role as an impressive one. The movie tells a love story of a simple girl from Bangalore who goes on to Hyderabad and meets a guy there. Nani is her costar in this fun movie where Nithya has scored full marks with her cute great looks and efficient performance, according to the initial reviews. She had even dubbed the entire movie in Telugu and sang two songs for the movie under the directions of the music director Kalyani Malik. Nithya is now expected to be a part of big banners and movies in Tollywood.