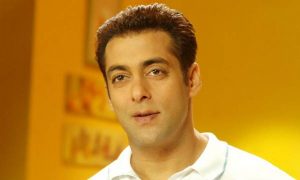 Sooraj Barjatya, who is trying to take his banner forward by making different kinds of movies, says he is keen to work with Salman Khan again. The director-actor duo is known for the superhits Maine Pyar Kiya and Hum Aapke Hain Koun.

‘I would love to make another film with Salman, but there is a little time before that happens, because I have to settle a few things in our company and in our television wings. Then I can take that up,’ said Barjatya.

‘There are lots of ideas in my mind, but I need to sit down and write and give them shape,’ he added.

The 45-year-old first wielded the megaphone in 1989 for Maine Pyar Kiya starring Salman and Bhagyashree. The film turned out to be lucky for all three. Later in 1994, the director and the actor teamed up again and set the cash registers ringing with Hum Aapke Hain Koun that had Madhuri Dixit in the female lead.

Salman has made a special appearance in Barjatya’s production venture Isi Life Mein, set to hit the screens Dec 24.

So does he consider Salman his lucky charm?

‘No, it’s not that. We asked Salman for this cameo not because of that reason. It’s just that we thought that we have all newcomers in this film, so why not take blessings from senior actors?’ clarified Barjatya, whose last directorial venture was the hit film Vivaah, starring Amrita Rao and Shahid Kapoor.

It revolves around the journey of a small town girl who belongs to a traditional family and is not allowed to dream and lead a life according to her own wishes. But somehow she takes admission in a Mumbai college and meets a boy and his gang of friends, who make her believe that she has the right and the capability to accomplish her dreams. It’s then that things start changing for her.

Rajshri Productions is known for making family films, and Barjatya feels it’s time to change the sensibilities of the banner and it has tried to achieve that with ‘Isi Life Mein’.

‘For Rajshri, this film is a challenge because it takes the production house beyond what I’ve done. This is not what I can do; so Vidhi has helped take the banner forward. It’s a change that we all have to accept to grow and be proud of and when a family member does so, it makes us feel more proud,’ said the filmmaker.

But doesn’t he feel that it’s a risky proposition to make a film with all newcomers?

‘It is totally a risk but someone has to take a chance and fortunately we have our own marketing unit, our own distribution, and that’s a great strength that Rajshri has. We don’t have to sell the film, so we can take a chance.

‘A lot of times the film fails, but the joy of backing someone and getting those fresh energies out is great,’ said Barjatya.