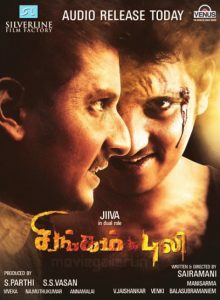 The basic story is rehash of earlier double action movies of identical twin brothers, one good chap while the other is a cunning bad guy. The film has traces of Ajith’s Vaali and Shatrungnan Sinha’s Kallicharan.

Siva (Jiiva) and his younger brother Ashok (Jiiva) are identical twins, who live under the same roof but are as different as chalk and cheese. Siva is a fishmonger in a market who has a fierce temper and can’t stand injustice while Ashok is a scheming lawyer and a Casanova who impresses everybody with his easy going nature.

Both the guys have girlfriends. Shwetha (Divya Spandana) an IT professional loves the fishmonger (!!!) while the lawyer cons another girl (Honey Rose), who mysteriously commits suicide.

Siva knows that though his parents and the society things highly of Ashok; he is a devil in sheep clothing. The brothers turn bitter enemies and the younger sibling plots to murder his elder brother which leads to a climax twist.

Till interval the film plods on with too many comedy scenes of Santhanam and double entendre galore. The second half the film falters and crashes out in a highly contrived climax. On the acting front Jiiva carries the double role with comfort, Divya Spandana and Honey Rose are there for glamour and songs. Santhanam’s comedy track is sickening and repetitive full of double meaning dialogues. Mani Sharma’s music is cacophony.

Singam Puli which promised to roar ends with a whimper. Let us hope that Jiiva will choose his films with a lot more care and understanding of today’s youth audience requirement from a mass film.