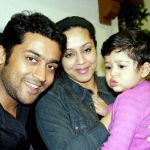 Suriya’s son gets a name as his entire fans are looking out. He’s been named ‘DEV’. On June 7, Jyothika delivered a baby boy and it was a glad tiding for not alone their family members, but for the entire cohorts of Suriya-Jo fans. Now, their child gets named as ‘DEV’. Well, the synonyms of DEV literally means – A god; a deity; a divine being; an idol; a king. Suriya’s sister Brinda also got her son named as ‘GUHAN’. The naming ceremony wasn’t a grand celebration as it was held normally amongst them. On this special occasion, let us wish for a very bright and colorful future of these kids

1 thought on “Suryas son gets a name”