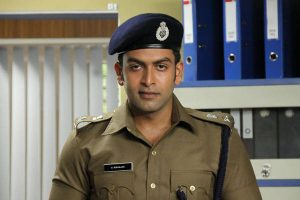 Remember those high voltage dramas from Ranji Panicker and Shaji Kailas which were full of fiery dialogues and thrilling scenes, like Commissioner? Well, writer-director B Unnikrishnan seems to have forgotten that style and glitz alone do not make interesting viewing.

Niranjan (Prithviraj) is a daredevil cop, who fears none and can take on a battalion of hardcore thugs, without much trouble. As the Deputy Commissioner of Police, he is investigating into the murder of Simon Palathinkal, the scion of a wealthy business empire, who lived life on his own terms. Niranjan who happened to see Simon dying and two dreaded criminals fleeing from the spot, tries to unveil the mystery behind the murder. His style of investigation is of course in a manner that perfectly suits a hero!

The situations and the characters have an uncanny resemblance to a controversial murder that happened in Kerala sometime back. The film actually tries hard to make the viewers remind about all those sensational things that came on the news channels and media during those days when it hogged the headlines. There are references to the activities of the business group, participation in the cricket league, real estate deals, wine ‘n’ women, two goons who were linked to the murder and even to the ‘curiously shaped knife’!

With punch dialogues, fights, close-ups and the hero’s walk in slow motion that is shown again and again, things become pretty repetitive here. The overall style is almost similar to some of those earlier films from Prithviraj, like Puthiya Mugham and the more recent Anwar. The visuals are good and the music is pretty ordinary.

It is Prithviraj who is the total focus here and the actor has been presented quite like a superhero. He has the charm for sure and looks quite convincing in those scenes where he has to prove his valour. But the obvious question could be, is that all you want from a movie?

The rest of the cast, including Sampath, Siddique, Lalu Alex and Vijayaraghavan, have done their jobs fine. The heroine, Catherine’s presence is mainly limited to a song sequence and a few scenes.

The Thriller is meant for the hardcore fans of Prithviraj. For the rest of the world, the film may be interesting in parts, at best.