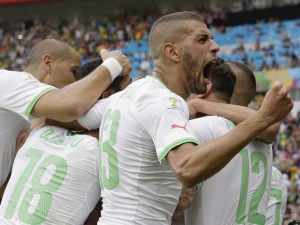 Porto Alegre, Brazil: Algeria moved them tantalisingly close to a first ever appearance in the knock-out rounds after dishing out a 4-2 defeat to South Korea in Porto Alegre on Sunday.

It was the North Africans` first World Cup victory since their famous 1982 success against West Germany and was the first time an African side had managed four goals in a single World Cup match.

First half goals from Islam Slimani, Rafik Halliche and Abdelmoume Djabou did the damage as Korea were on already their knees at the break.

Son Heung-Min and Koo Ja-Cheol gave Korea some hope in the second half but Yacine Brahimi`s fourth for Algeria kept them in charge.

The result spirited Algeria up to second in Group H behind Belgium, with Russia and the Koreans trailing on one point apiece.

On a perfect afternoon in this southern port city, Algeria came out fighting for their World Cup lives, only too aware defeat would send them home.

But their impressive start reaped its initial reward when Slimani raced onto Carl Medjani`s lob, saw off Korean defenders Hong Jeong-Ho and Kim Young-Won and flicked the ball past Jung.

The rattled Koreans were picking the ball out of their net again two minutes later when Halliche out-jumped his markers to head in Djabou`s corner from the left.

The Desert Foxes had their tails up and as the Koreans struggled to cope with their pace and technical nous, Djabou tightened their grip on the game when sweeping the ball past the hapless Jung eight minutes from the break, thanks to the slide rule assist from Slimani.

Korea reduced the deficit with the second half just five minutes old thanks to a piece of individual wizardry by Son.

A long ball into the box by Ki Sung-Yeung bounced off his back, but he swivelled round to fend off Madjid Bougherra and shoot low and hard past Algerian keeper Rais Mbolhi.

Korea kept putting the heat on Algeria and Mbolhi made a brilliant save to deny Ki.

Brahimi`s right-footed finish after a slick passing move between him and Feghouli settled any Algerian jitters.