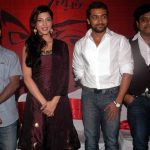 The entire shoot o Suriya’s AR Murgadoss directed Udhayanidhi Stalin produced 7 am Arivu is over.
The film enters post-production stage from now.
Udhayanidhi himself had conveyed the news through Twitter: “7 am Arivu shooting over! Thanks to Murugadoss sir, Suriya, Ravikchandran sir and the whole crew! ”
7am Arivu is said to be a sci-fi thriller in which Suriya, plays a triple role as circus artist, Buddhist monk and a scientist.
Shruti Haasan, is the heroine while Vietnamese stunt actor Johnny Tri Nguyen will play the bad guy.

The film has music by Harris Jayaraj.

Last week there were reports that a song from the film was leaked, but it has been denied by the producer.