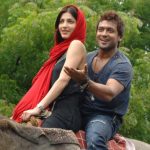 We have confirmed sometime ago that 7aam Arivu will hit the marquee this Diwali. The latest on this is that the film will be released in Telugu as well under the title 7th Sense. Suriya enjoys a huge fan following not just in Tamil Nadu but also in Tollywood and Bollywood.
This star’s immense popularity has made the filmmakers to consider releasing in Telugu and the work in this regard is now in progress. The latest buzz in Kollywood is that Sun Pictures may step in and take over 7aam Arivu and the talks are on for this. The other film that Sun Pictures is eyeing to buy is Nanban. An official announcement may be made anytime soon, it is expected.