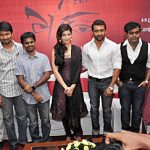 The music of director A.R. Murugadoss’ 7aam Arivu, which has Suriya and Shruti Haasan in the lead roles, will be launched in Chennai on September 22, 2011. The director is currently busy with the post production works. The story is said to revolve around a time machine which is brought to India by a scientist (played by Shruti or Suriya according to conflicting versions). The film is also being dubbed in Hindi and Telugu.

7aam Arivu is a sci-fi thriller in which Suriya plays a double role: a circus artist and Buddhist monk. (There are reports that Suriya will sport the look of a Buddhist monk for only 20 minutes in the film.) Vietnamese stunt actor Johnny Tri Nguyen will play the baddie. Ravi K. Chandran handles the camera while Harris Jayaraj is the music director. According to sources, Suriya is also planning to perform the circus stunts he has learnt during 7aam Arivu live for his fans at the audio launch of the film, which is likely to take place in Chennai.