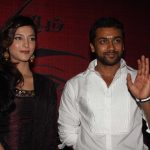 Phrases like ‘eagerly waited’ and ‘much anticipated’ are fast becoming clichés when talking about a Suriya film these days. So simply put, the shooting of Suriya’s ‘7am Arivu’ will complete by mid March and the audio of the film will be launched on March 28.
In the film Suriya plays Anwar Basha, a trapeze artiste who also doubles up as an animal trainer. Shruthi Kamal plays Shalini, his love interest. Suriya was trained for his acrobatic acts by a renowned circus company in Coimbatore and as always the creative actor learnt the art well.

According to sources the audio launch will be a spectacular feat with Suriya performing some dare devilry acrobatics live on stage. The mega music launch will happen at the Nehru Indoor Stadium on March 28.

Suriya will perform acts like trapeze, 10 balls juggle, human pyramid etc. He will do some 10 amazing feats along with trained circus artistes who will be specially flown in for the event.

As soon as the shoot is completed by mid March, AR Murugadoss will go into post production immediately. The innovative story line demands high end special effects and ARM will spend two months to get them perfect.

The producer of the ‘7am Arivu’, Udhayanidhi Stalin of Red Giants is planning to release the film in August. It will also be dubbed in Telugu.