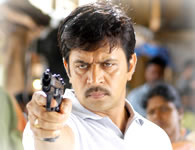 Action King Arjun is moving steady and strong in his career as he has entered 50’s. Currently, Arjun is doing two projects Maasi and Mankatha and we hear that he has bagged another project Om in which he plays his favourite role of an angry man.

Om is directed by Ilankannan who gained a good name with Arjun’s film Ottran. Both Arjun and the director share a good rapport for the past ten years. Ilankannan has again impressed Arjun with his action packed script which is racy and interesting. Arjun immediately gave his nod for doing the film and the film is likely to go on floors soon. Sakthi Chidambaram is producing the film.

Meanwhile, Arjun is busy with Mankatha in which he plays the role of a CBI officer.