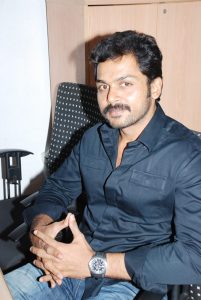 Karthik Sivakumar (born 25 May 1979), is a tamil film actor best known by his stage name Karthi is the younger son of veteran Actor Sivakumar and brother of Actor Surya.He made his acting debut in 2007 with the top-grossing film Paruthiveeran, receiving critical acclaim and the Filmfare Award for Best Actor for his performance as the titular character. He went on to appear in commercially successful ventures Aayirathil Oruvan, Paiyaa, Naan Mahaan Alla and Siruthai which established him in the Tamil film industry

In India, he met director Mani Ratnam, who initially offered him the role of Arjun (later played by Siddharth) in the film Aayutha Ezhuthu. But Karthi instead joined him as an assistant director for the same film and its Hindi version Yuva, since he always wanted to become a film director and preferred direction to acting.[9] However, he continued to receive several acting offers. When Ameer Sultan approached him to play the lead role in the film Paruthiveeran, Karthi eventually accepted the offer as the film was “so compelling”.[9] The film was critically and commercially very successful, whilst his portrayal as a careless village rowdy was immensely appreciated by critics and earned him several awards, including the Fimfare Best Tamil Actor Award.

In January 2010, his second film, the Selvaraghavan-directed fantasy adventure Aayirathil Oruvan, was released. The film was stuck in production for a long time, releasing three years after his debut film.His character in the film was often compared to that in his debut film.[13] In April 2010, his next project, the romantic-road-trip film, Paiyaa directed by N. Linguswamy was released, which, supported by an exceedingly popular “blockbuster album” by Yuvan Shankar Raja, went on to become hugely successful at the box office. Both films were subsequently dubbed into Telugu as Yuganiki Okkadu and Aawara, respectively, and proved to be commercially successful in Andhra Pradesh, too.

Later that year, he had his third 2010 release with Suseenthiran’s drama-thriller Naan Mahaan Alla. The film released to rave reviews and was declared a blockbuster,and also fetched accolades for Karthi, with critics unanimously praising his performance in the film.[21] Sreedhar Pillai of Sify.com stated that he “nails the character to perfection” and was “one good reason to watch the film”,while Times of India reviewer Bhama Devi Ravi described his performance as his “best work yet”.In his 2011 release Siruthai, the remake of the 2006 Telugu film Vikramarkudu, he essayed dual roles for the first time.