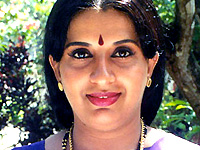 Yesteryear actress Ambika who has been aspiring to be a director for a long time is very excited about her directorial venture.

Her brother Suresh Nair is in charge of the story and screenplay. Dialogues are written by Ambika herself.

Ambika says her movie will be a suspense thriller with enough comedy scenes. She assures that it will be a clean family entertainer.

The lead characters will be played by debutants. The Pooja of the yet to be titled movie will be held by December first week and will start rolling by December second week.