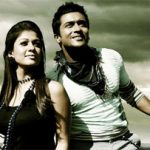 Banner: Red Giant Movies
Production: Udayanidhi Stalin
Direction: K.S. Ravikumar
Star-casts: Surya, Nayanthara, Murali, Rahul Dev, Saroja Devi, Vadivelu, Shiyaji Shinde and others.
Music: Harris Jayaraj
The film is about a contract killer Aadhavan (Surya) – a man who can bump off anyone with an ease. His father (Shiyaji Shinde) makes a big deal with Abdul (Rahul Dev) and Aadhavan is assigned to kill a magistrate (Late actor Murali). But the sharpshooter misses his point and judge survives. Now, Aadhavan hatches the plan to assassinate the magistrate over his house, who’s enjoying his holidays with family members.

But every time he attempts to bump off the magistrate, there’s something deteriorating his plans.

And then, Aadhavan’s secret past brings an ultimate twist in the tale.

The film reminds you of various movies, say Rajnikanth starrer ‘Thai Veedu’ which in turn was a remake of Hindi movie ‘Jeet Hamari’. Surya excels with his adeptness over stunts, dialogue deliveries, dance and comedy as well. Vadivelu’s presence over 95% of the film offers more substantiality to the film. Indeed, his comedy tracks are rib-tickling which makes you laugh and enjoy it.

Surya shouldn’t have opted for some dim-witted gestures as the opening sequences about bumping off a Swamiji. A kind request to K.S. Ravikumar: functionality of guns under water would be reduced to extreme level and it would not function properly. But our hero triggers the bullet straight into the target.

Presenting Surya in the negative shade till the penultimate sequence is the biggest minus for the film. At the least, KSR should’ve broken the suspense at intermission and that would have offered a relief to audiences.

Saroja Devi is okay while Murali steals the show. Shiyaji Shinde should opt for a yet more challenging role. An actor who made a spellbinding act with his debut film ‘Bharathi’ is spoiling his image over donning certain clichéd roles of a baddie. Rahul Dev sleepwalks through his role.

The costumes over the song are perfect and Surya seems to have strongly demanded for Bollywood type of dresses spotted with Aamir, Salman and Abhishek Bacchan. Cinematography is average and most the shots have been done with Green Matt. Except ‘Hasili Fisili’, none of the songs sound pretty well and it’s a great disappointment from Harris Jayaraj… Harris’ background score with English songs is all about inviting ridicule….

Ramesh Khanna doesn’t deserve anything special for penning such stories.

‘Aadhavan’ may have good collections over the box office has producers have planned for perfect scheduling of more shows for the first weekend. On the dot, the film is a polished version of so many yesteryear films.