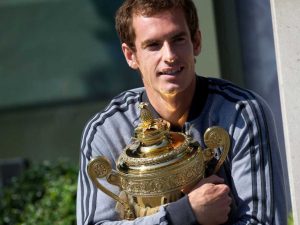 Defending champion Andy Murray and Novak Djokovic, the man he beat in 2013 to capture Britain’s first Wimbledon title in 77 years, on Friday landed in the same half of this year’s draw, leaving Roger Federer the biggest winner.

Murray, who has been seeded three, could face top-seeded Djokovic in the last four while seven-time champion Federer, the fourth seed, is scheduled to renew his rivalry with world number one Rafael Nadal in the semi-finals.

But Nadal, the 2008 and 2010 champion, has been seeded second this year after losing in the first round in 2013 and getting knocked out in the second round 12 months earlier.

The 28-year-old Spaniard, who won a ninth French Open earlier this month, has already expressed fears over whether or not his famously brittle knees will stand up to two weeks of grasscourt tennis.

His mood will not have been helped by the draw which lined him up for a possible second round clash against big-hitting Czech Lukas Rosol who knocked him out in 2012.

Murray could face a quarter-final against seventh seed Spaniard David Ferrer, who has been battling injury, or Queen’s Club champion and 11th seed Grigor Dimitrov.

Top seed Djokovic, the 2011 champion, will meet Andrey Golubev of Kazakhstan, also on Monday, with the Serb possibly facing France’s Jo-Wilfried Tsonga in the fourth round and former runner-up Tomas Berdych in the quarter-finals.

Czech veteran Radek Stepanek, who beat Murray at last week’s Queen’s Club event, could be a second round opponent.

Federer and Nadal will begin their campaigns on Tuesday.

Federer, looking to break free from his seven-title tie with Pete Sampras, opens against Paolo Lorenzi of Italy and could then face Julien Benneteau or Gilles Muller.

Qualifier Muller beat Nadal in the second round in 2005 while Benneteau had match points against Federer in the third round in 2012 before losing in five sets.

Women’s top seed Serena Williams, a five-time winner, and Maria Sharapova, the champion in 2004, were drawn in the same quarter.

Sharapova, who beat Williams in the 2004 final to win her first major title, opens against British wild card Samantha Murray, while Williams is up against Anna Tatashvili of Georgia.

In the absence of defending champion Marion Bartoli, who retired after her victory last year, beaten finalist Sabine Lisicki of Germany will open play on Centre Court on Tuesday against Julia Glushko.