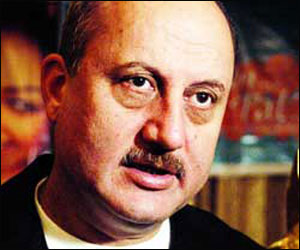 Anupam Kher has been one actor who has mesmerised the viewers including those in Kerala, with his quality roles. He was always expected to have debuted anytime in Mollywood in some art house movies. But he had earlier made a not so remarkable debut with the movie ‘Praja’ which was not much appreciated.

After this movie which came out in the late nineties, now the talented senior actor has found some time to allocate his dates to two different movies in Mollywood, with both the reigning super stars of Mollywood. Interestingly, both these movies ‘Pranayam’ and ‘The Train’ are well panned out commercial movies.

‘Pranayam’ directed by Blessy will have him with Mohanlal in a triangular love story. Jayapradha will be the heroine of this movie, which has already started its shoot at Kottayam region.

Anupam Kher will be appearing as a city police commissioner in the Jayaraj movie ‘The Train’ which is based on Bombay blasts. Mammooty will come up as the head of anti-terrorist wing in this movie.