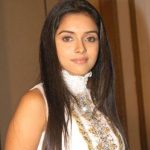 It is now confirmed that South Indian beauty Asin will be the heroine opposite Shahrukh Khan in his next film titled 2 States, a screen adaption of Chetan Bhagat’s bestseller ‘Two States’. Earlier, there were rumours that either Priyanka Chopra or Deepika Padukone might be the heroine.

Notably, Asin has already shared screen space with the other two Khans (Aamir Khan in Ghajini and Salman Khan in London Dreams and Ready). 2 States is directed by Vishal Bharadwaj. Sajid Nadiadwala is the producer.

2 States chronicles the life of a young couple Krish and Ananya, who belong to Delhi and Tamil Nadu respectively. They meet while studying at IIM, Ahmadabad. Their parents are against their ‘cross cultural’ marriage.

2 thoughts on “Asin confirmed opposite SRK in 2 States”