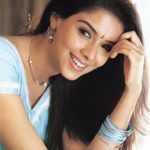 We all know Asin, the actress but now we bring to you Asin, the cricket fan! Despite being busy with her shooting schedules, the actress rushed to watch the Final ICC Cricket World Cup match as soon as she was done with the shoot. Asin confessed that she was hooked to the TV and she praised the Sri Lankan team for performing well. But she said that India totally deserved the cup for it played better and the captain Dhoni’s leadership was one of the high points.

She said that the spirit among the boys was the best part of it all and lauded Team India for their hardwork, determination, courage and talent. She also went on to thank them for giving everyone a reason to unite in happiness and celebration. Looks like after Cinema, Cricket is her passion!