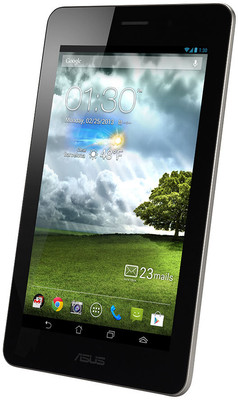 ASUS Fonepad tablet which was earlier showcased in the 2013 Mobile World Congress in Taiwan has silently rolled out the fortified version of the Fonepad tablet with three main upgraded features focusing on processor, internal memory and price.

The boosted version of the older ASUS Fonepad tablet runs on Android 4.1 Jelly Bean operating system. It holds 7-inch IPS display with a resolution of 1280X800 pixels. It offers a 1.6Ghz Intel Atom Z2420 processor and 1GB of RAM with 3MP rear and 1.2MP front facing camera. Its inbuilt storage has increased from 8GB to 32GB unlike its predecessor and is expected to be non expandable.

Much similar like the original Fonepad this beefed up version too comes with voice calling support on GSM 900 and 1800 frequency bands. The connectivity options include 3G, Wi-Fi, Bluetooth with SIM support. It houses 4,270 mAh battery backup. The giant manufacturer didn’t make any official announcement before unveiling the upgraded version of the Fonepad tablet but was caught online shopping sit-Flipkart priced at Rs. 17,999.